The 13th BCSWomen Lovelace Colloquium was due to be held at the University of Stirling, with support from the University of Glasgow on April 8th 2020, however due to the COVID-19 pandemic the event was held online as the first virtual Lovelace Colloquium. The organising team were Helen Miles (chair), Hannah Dee (conference founder and deputy chair), Carron Shankland (local chair, UoS), Alice Miller (UoG), Amanda Clare (supporter from Aberystwyth University), with extensive support from Ros Walker (a learning technologists at UoS). We had 132 abstracts submitted, and 45 students presented their digital posters on the day, with many more in general attendance.

We couldn’t do a group photo but we approximated this online by collecting a bunch of selfies – which gives something of a feel for the attendees. 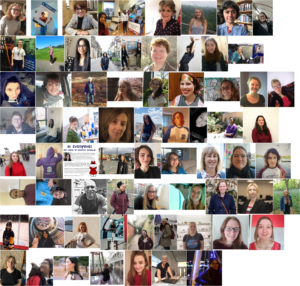 The Abstract Book, containing most of the abstracts accepted at the colloquium is available as an e-book in PDF form. Abstract book 2020 BCSWomen_Lovelace Colloquium

This doesn’t overlap perfectly with posters presented at the event – because of the last minute switch to online (we held the conference less than 20 days after Lockdown started in the UK) the attendance at the virtual event was lower than normal, and a few students dropped out in the last few days before the event.

One of the advantages of a virtual conference is that you don’t have to get people from room to room, and actually, short talks work really well. So instead of having a small number of substantial talks (as we usually do) we had a lot more short talks. Another advantage is that the talks are all online, so if you would like to watch any of the talks here they are.

Reports on the day

Various people have written blog posts about the day, including:

Second year contest (also open to students on their industrial year or on the 3rd year of a 4 year degree), sponsored by JP Morgan:

The judges also wanted to give an honourable mention to:

The judges also wanted to give honourable mentions to: